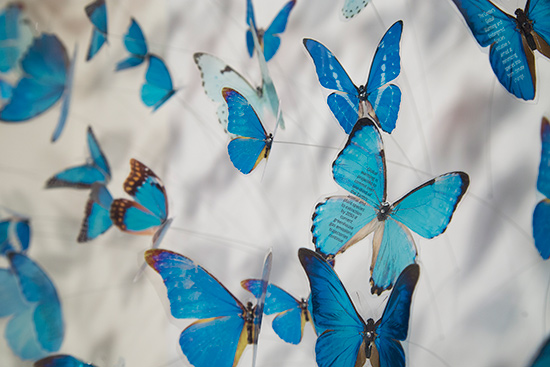 The largest of the exhibitions, the MFA Painting and Sculpture Exhibition, is on display at the 808 Gallery. The massive sculpture dread locks, by Claire Roll (CFA’16), is the first thing visitors see in the gallery, it literally takes them into space. Several works by 13 MFA painting students make up the rest of the exhibition.

People entering can walk through Roll’s colorful, curvy, braided structure, made of wood, fabric, wire, and foam. Her thesis project presents “an invitation to participate in a common experience,” she says. “It invites the public to engage physically by passing through recognized architectural forms: the thresholds.” dread locks also involves “forging a human connection through the accumulation of ritual actions”. For Roll, the act of wrapping, weaving and building structure became ceremonial through his use of repetition. She says her interactive creations are “metaphorical representations of rituals and transformative lineages – the connection between the one who came before, the one who crosses in the present and the one who will cross after”.

The only female sculptor represented in the exhibition, Roll incorporates materials like cement and copper into her other works, which dot the vast space, drawing patrons in like a magnet.

Not far from dread locks is a wall of paintings by Leeanne Maxey (CFA’16). In an exhibition filled largely with large canvases with neon color palettes, abstract compositions and wild textural elements, Maxey’s work has an impressive impact due to its subversive delicacy, an effect achieved mainly through his use of watercolor.

two of his plays, Constructiondone in watercolor on canvas on cardboard, and act naturally, watercolor and oil on canvas overboard, features a cropped view of a limb paired with overgrown leaves or grass. Compositionally, these works express division, both in their perfect horizontal layering and in their competing detail – from the fine hairs on one arm to a tangle of bright green blades of grass. Not only the level of detail, but also the vibrancy she achieves with the watercolors is impressive.

“I find it fascinating that as a society we construct nature and then use our ideas about it to reinforce cultural narratives and expectations about body presentation, sexuality, and the landscape itself,” says Maxey. “Both the female body and the landscape have historically been subject to tales of discovery, exploration and conquest, but continue to be seen as having essential natures under male control. As a lesbian having growing up in the South, my identities were often at odds with the ideologies rooted in my evangelical upbringing and in the wider community.In response, I use organic matter imagery to further the idea of ​​natural versus unnatural , a theme that comes up often when I discuss my sexuality with my family at home.

Corey Larue (CFA’16) also draws inspiration from his own life for his paintings. “My work is about the Chicano experience,” he says. “The images in my paintings relate to this experience and reference political concerns, my family, and my Chicano heritage. The materials I use also refer to components of the pictorial dialogue presented.

A remarkable exhibition is that of Larue Chocolate, made with chocolate and wax on canvas. Like many of his works, the piece has subtle religious imagery, with a cross embossed in the middle of the canvas and a blue bandana affixed to its center. Mixed with the wax and spread around the canvas, the chocolate has a rusty, gritty effect. Larue also conveys a sense of violence with the perforations and scratches that appear around the composition. Chocolate, he says, refers to colonialism and “to the current genocides that affect indigenous communities in the Americas for the manufacture of basic products”. Such communities, he says, are “forced into chaotic systems of violence, one of them being organized crime – which is why I used a blue bandana in the painting.”

Close to Chocolate hang up Larue’s painting Las Paredes, a canvas with an aluminum flashing that hides an underlay. The slats between the flashings barely expose what lies below, inviting the viewer to come closer to investigate. Larue says that the title and the work itself “refer to the wall, or border, between the United States and the South of the Americas” as well as the “mental and spiritual walls” that people build around ‘them.

“It’s my goal as an artist of color to create a dialogue about race and belonging,” he says, “with the intention of demystifying and normalizing aspects of my heritage to the majority culture.” .

Richard Ryan, associate professor of painting at CFA, describes this year’s MFA painting and sculpture exhibition as “brave and full of adventure,” praising the energy the students displayed throughout the program. “They have created a wonderful living and breathing exhibit.”

A short distance down Commonwealth Avenue and across the street, visitors can check out the Graphic Design MFA Thesis Exhibit, titled _______ Point, at the Faye G., Jo, and James Stone Gallery, which features works by 11 MFA students, ranging from bold posters to interactive installations.

For her thesis project, Erin Sanders (CFA’16) created English Language AD**ktionary. Presented in both book form and large wall posters, the humorous work features re-appropriated words and their definitions, many of which draw inspiration from pop culture phenomena and millennial sensibility (one example is the word “textpectation ”, which Sanders defines as “the anticipation one feels when waiting for a response to a text message”).

Sanders is struck by how beautifully language is able to evolve to reflect the times. “As graphic designers,” she says, “our job is to keep up with technological advancements and become cultural anthropologists. My hope was to cultivate cultural awareness in a way accessible to my audience.

For his graphic design project, Protect endangered species from global warming, Ge Feng (CFA’16) created a swarm of realistic butterflies. Printing them on transparent paper in contrasting blue and yellow with a laser printer, she incorporated text, which appears on some of the butterflies’ wings, of facts about endangered species.

Feng says the butterflies are meant to be “a metaphor for all endangered species.” Her research on the subject has enlightened her on the particular sensitivity of butterflies to global warming. “Plus,” she said, “they’re so beautiful and fragile.” She fixed the butterflies to galvanized steel wire and mounted them on foam board so that they protrude from the gallery walls and appear to be shaking. Additionally, she placed some of the butterflies – the ones that burned and melted – further up the wall and onto the floor to “represent how global warming is driving species to extinction.”

The final installment of the School of Visual Arts’ thesis work can be found several floors above the Stone Gallery, in Gallery 5 on the fifth floor: The Master’s Thesis Exhibition in Art Education, showcasing the projects of nine students from the master’s studio. Teaching and arts education programs. Written descriptions of the philosophies students have developed in their teaching to students are paired with their students’ work.

Mara Sassoon can be contacted at [email protected]